From their ridge-top perch on the north side of McCulley Mountain, Mike and Jo Barsotti have Willamette Valley views stretching to Mary’s Peak.

The couple — Linn County Tree Farmers of the Year — shared that view, along with their management techniques on their 20-acre property, Saturday Sept. 25.

The tour attracted about 30 people on a sunny day. It was punctuated with stops where activities like pruning, brush and deer control, as well as replanting steps after a clear cut were explained. Handouts provided detailed growth charts and a narrative of tree farming activities.

2001 Bentz Family The Bentz family were National Tree Farmers of the Year in 2002. Clint has remained active in OSWA

Robert Wolfenbarger was the Linn County TFOTY back in the ’90s

The Barsottis purchased a fully stocked mixed-age farm 20 years ago. Three harvests have netted 362 thousand board feet of timber. The current standing volume its estimated at 415 mbf.

Harvests have come when timber prices have been favorable. Economics are not the driving factor, but are a factor in management decisions. Money from the harvests have been plowed back into the property.  A 2,500-foot looped road was built and rocked, for example.

Mike Barsotti was an Oregon Department of Forestry service forester in the 1980s and ’90s assisting family forest landowners converting pastures and brush ground back to trees.

He saw a quality in those land owners, and that pushed the couple into the tree-farm business. Their farm has been a team effort.

“Jo found the property. It was for sale by owner,” Mike Barsotti explained on tour. “It had the three things I was looking for, young trees, good ground and near Stayton.”

At this point, “their primary forest management objective is to have a healthy resilient forest. Wildlife and aesthetics are secondary objectives.”

Deer have been discouraged with bud caps, but critters like gray foxes, song birds and bobcats are around at their 1,600-foot ridgetop property.

Mike Barsotti said he has seen two fox kits this year with the parents. “I have no idea where their den is,” he said.

Among the lessons he has learned as a tree farmer, good communication skills are important.

He and a neighbor collaborated on the timing of 2018 clear cut. Also, staying in touch with contractors, he said, have paid dividends in scheduling timely work.

“Long-term relations with loggers pay off,” said Barsotti. “You can’t say too much about good operators.”

Both Jo and Mike are Oregon State University Extension Service master gardeners. Evidence of their success was on display — tomatoes, sweet corn, peppers and zucchini in lush beds. A greenhouse and a timbered three-year composting system are part of the garden layout.

Following the tour, the Barsottis were presented with their 2021 TFOY sign. Oregon’s tree farmer of the year will be announced next summer.

Covid restrictions were followed for the event. Catered sack lunches with tasty sandwiches, salads and other goodies were provided by Trexler Farms in nearby Lyons.  The overall tour was hosted by the Linn County Small Woodlands Association. 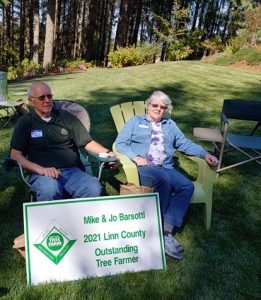