In 2013, when Kathy and I were visiting our son, Steve in Japan, we had the opportunity to tour the Temples in the city of Kyoto, Japan’s old capital city. I was particularly struck by the particular feeling that the buildings and gardens evoked, a kind of calm, simplicity, and fragility that drew you in. I struggled to understand what specifically caused this. More than the architectural style or particular landscape elements, it was an aesthetic that tied the place together. Later, I read the story of Sen no Rikyu, a Japanese tea master who lived in Kyoto in the 1500s, and studied at the Daitoku-ji temple there. Besides developing the tea ceremony practiced in Japan today, he established and popularized the concepts of Wabi (deliberate simplicity in daily living) and Sabi (appreciation of the old or worn). A precise definition of Wabi-Sabi in the English language is difficult, in part because western culture has little that is similar in our daily life. Although Wabi-Sabi is more a feeling than a design style, it celebrates, according to Richard Powell, three central ideas:

Further, this philosophy, if you can call it that, celebrates these limitations. That fact that something is impermanent and imperfect are the very things that evoke its beauty. This idea can be appreciated in the beauty of falling cherry blossoms in spring, or the falling leaves in autumn.

Recently, I made an attempt to carry Wabi-Sabi into my work and life. My daughter, Erin, and her husband had asked me to build a coffee table and dining table for their home. I started with the coffee table. While building their home several years ago, they had cut down a Willamette Valley Ponderosa pine tree. It was sawn into boards and stacked outside in the weather that first year. Since then, it has been stickered and in dry storage for several years. We decided to use that pine for the tables, now swirled with blue stain from the fungi carried by pine beetles, and leave the live edge on the sides. I also had been recently given a 2-inch-thick slab of black walnut from Jim and Ed Merzenich’s sawmill operation. It was an ugly piece at first glance, and had been heading for the burn pile. After it was planed, the grain swirl and quilting was revealed. Only 42 inches of the walnut was salvageable, so that was the length of the coffee table. I put the walnut in the center, and the live-edged pine on both sides, and finished with several coats of Danish oil. The table is somewhat irregular in shape, there is a knot hole in the walnut, and the blue stain is quite dramatic. It exudes Wabi-Sabi. Pieces that are flawed and salvaged, put together simply, reveal the beauty and elegance of the wood.

Beyond woodworking, Wabi-Sabi has given me a gift of perspective. I have begun to learn to value growing older. I recognize what has been lost and gained over time. I particularly appreciate my beautiful wife of 48 years. When we were dating, I was sure she was perfect, and the most beautiful girl I had ever seen. I have learned over the years that neither of us is perfect, and that physical beauty is unimportant compared to the greater beauty shown in her confidence and kindness.

As winter begins, and I start the design of the dining table, fog settles over the tops of the fir trees, a bald eagle floats down for his winter stay in the valley, and the last few brown leaves tremble on the Japanese Maple outside the window. Our Grand fir Christmas tree has a gap on one side and all the old worn ornaments, collected over the years, glow soft in the firelight. Beautiful.

Posted in News, President's Column
Find out more about membership 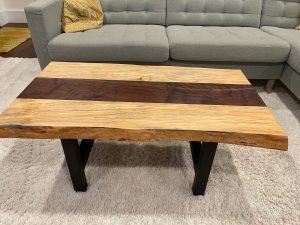