New officers and board members have been selected by the Linn County Small Woodlands Association.

The woodlands advocacy group held its annual meeting January 21 in Scio after a three-year hiatus because of the Covid pandemic.

The potluck dinner and business meeting were attended by about 100 people. 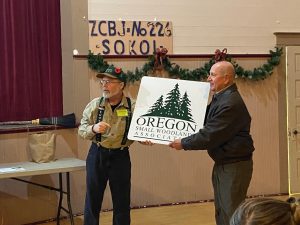 Lee Peterman, left, gifts an OSWA tree farm sign to Clem Olgilby in appreciation for Ogilby hosting a tree farm tour in May.

New chapter President Mike Barsotti is taking over for Tim Otis. Barsotti is a retired forester and past president of the statewide Oregon Small Woodlands Association. He and wife Jo manage their tree farm near Lyons.

New board member Christie Tye of Lebanon is the new board secretary, taking over for Scio businessman Jonathan Christie.
Tye is the daughter of Sherm and Fay Sallee and has been active through the years in the 4-H Clever Clovers Forestry group.
Shirley Holmberg will stay on as treasurer, while Jim Merzenich is the new vice president.

Other board members approved by the membership are directors Jim Cota, Bonnie Marshall, Tim Otis (past president) and Lee Peterman.

The gathering included an update on activities of the 4-H Clever Clovers and also introduction of the two LCSWA forestry scholarship students — Joseph Passenant of Albany and Madelyn Neuschwander of Sweet Home.

Nicole Wood, president of the statewide Oregon Small Woodlands Association (OSWA), spoke about the mission of OSWA. She said among the group’s priorities this year will be improving communications between OSWA’s chapters, including links to local web sites from the statewide OSWA site.
Given the absence of meetings in the past several years, the program featured presentations honoring the past three county “Tree Farmers of the Year” and biographies of long-term members who have died in recent years.

Door prizes and a live auction featuring bird houses, power tools, and Broom Magic brooms were also part of the evening at the Z Hall in Scio. Membership in the LCSWA is currently 113 members, with another seven subscription members. 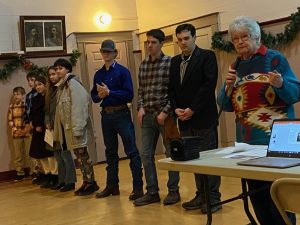 Members of the Clever Clovers forestry group outlined their activities of the past year. 4-H leader Fay Sallee is at the right.