I have always been a weather nut; I took “elective” weather classes while in college out of passion for the science.  When we moved to what has become our Tree Farm on the headwaters of One-Horse Slough, I began recording monthly rainfall amounts.  When I learned about the Community Collaborative Rain Hail and Snow network (CoCoRaHS) in November 2007, I promptly joined, becoming their first station in Linn County (OR-LN-01). I’ve been reporting daily since and have now reported more than 5,000 precipitation readings. Oregon State Extension has information if you are interested in joining the CoCoRaHS citizen science network and their website can be found here. www.cocorahs.org/

Living in Western Oregon, you might think it rains all the time.  On the contrary, it rains only about half of the days of the year.  Some of those days are clustered while others are spread apart.   However, only six of the past 240 months have been rainless – five Julys and one August.  The greatest annual precipitation was 62.33 inches in 2012 while the least annual precipitation was 35.21 in 2013.  Wet followed by dry.  The most single-month precipitation was 15.93 in November 2006.  The average annual precipitation during the past 20 years is 47.65 inches.  My poor brothers in California might have had 4 inches for the entirety of 2021, so when they do get rain, they refer to it as “Oregon Missed.”

My total precipitation for 2021 was 45.01. About two and half inches short of my 20-year average.  We tried to catch up the past few months but didn’t quite make it. By late September, there was only 24.62 inches in the rain gauge for the year — among the driest years of the past two decades. We received almost 4 inches for the first week of 2022, a good start for the year.  With El Nino we might an above average year for precipitation. As of January 6, the U.S. Drought Monitor has listed Linn County in the D1 or “moderate drought” category. 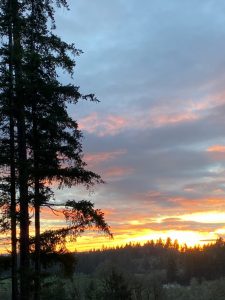