As we begin 2008, we do it without Willamette Valley Pine enthusiast, Bob Mealey, a longtime friend and inspiration for Valley ponderosa pine planters everywhere. As foresters go there are few his equal. As steward of the land I have found none greater. Complexity in nature is what makes a forest so resilient, so enduring and so powerful. Such was the complex life of this man of more than 94 years.

To me a mark of greatness is what we do with the constructive criticism we receive. By this measure Bob was indeed great. He hosted a statewide forestry tour on his home property in 1978, and after a good tongue lashing from a tour participant and old professor, T.J. Starker, about opportunities lost, set out to bring his lands into full productivity. Changes he made were a big part in his being named the western regional outstanding tree farmer a decade later.

In 1989, at age 76 Bob signed up for OSU’s Master Woodland Manager training, reckoning that he could brush up on his forestry skills a bit. For more than a decade, he served as a volunteer, assisting dozens of other landowners with a host of tree growing questions.

Bob’s life offers strong evidence that one solitary life can make a big difference. But for the life of Bob Mealey there might be no:

The legacy Bob most wanted to pass along is the Mealey Tree Farm which overlooks Foster Dam. Bob lived with a strong land ethic. I am sure that this is what he referred to in his poem “Though I’m So Old,” when he said, “These gifts I value more than gold, so I’ll plant a tree though I’m so old,” to sustain many future generations of Mealeys. As we get ready to put our pine trees in the ground this year, let’s all pause and thank a man “who was so old!”

Here’s a link to information about the Willamette Valley Ponderosa Pine.

Here’s an article about Bob Mealey from the Corvallis Gazette-Times. 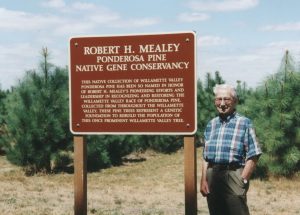 Photo by Bob McNitt Bob Mealey at the Native Gene Conservancy dedication in 2000.