Significant rain has washed over the Willamette Valley for the first time in three months.

Weekend storms may have filled some cracks in the local clay, but it’s no drought-buster.

“Depending upon what falls during the remainder of 2021, this year could be the driest of the past twenty,” said tree farmer Joe Holmberg.

Holmberg’s foothill acreage is about three miles north of Waterloo.

The U.S. Drought Monitor has almost all of Linn County in “extreme drought” as of Sept. 16.

Holmberg, a LCSWA member, has been keeping records as part of the CoCoRaHS system for two decades. He reported the weekend rain was about 10 percent of the 24.62 inches so far in 2021.

“November and December are the wettest months here in Western Oregon,” said Holmberg, “so there is time to avoid supplanting 2013 as the driest year.”  The National Weather Service is forecasting the next three months to be wetter than normal, he added.

“Here’s hoping they are spot on,” said Holmberg.

Accuweather’s Sept. 20 forecast, however, predicts no rain in the next seven days. Linn County and Oregon department of Forestry outdoor burn bans remain in place but the rain has allowed for increased forestry activity.

Tree farmers have been up against it weather-wise in 2021. A February ice storm preceded a dry spring — then all-time record highs scorched trees for three days in late June.

This year’s extreme weather came after six years of generally poor conditions in the Willamette Valley — high temperatures, low humidity and drought, according to a July article in The Oregonian.

Even well-established trees are susceptible to extreme weather.

“They suffer kind of an internal failure, and they just die very suddenly,” said Glenn Ahrens, an OSU Extension forester. “And people are looking for disease or an insect to blame, but it’s really just climate stress,” Ahrens told the newspaper.

When exposed to intolerable heat — particularly on an “open edge,” such as the unshaded end of a forest — leaves may not be able to cool down, which can be all it takes to kill a tree, Ahrens said.

Lisa Tadewaldt, an arborist for Urban Forest Pro in Portland, told the newspaper the June heat wave exacerbated damage from February’s ice storm — as well as the ongoing drought.

“What does 115-degree weather do to trees in Oregon?” Tadewaldt asked. “Anyone that pretends to know is lying.”

Perhaps the largest factor weighing on trees in recent years is drought.

A significant portion of the Willamette Valley die-off began in 2014, following a severe summer drought season in 2013, according to a 2015 report from Brad Withrow-Robinson, OSU Extension Service advisor for Linn County.

Before that year, the most recent drought conditions in the area were experienced in 2000, according to Withrow-Robinson’s research.

During the past few years there have had a series of drier, longer summers, which have had a cumulative adverse effect on the forest health in the valley.

The iconic Douglas-fir, grand fir, western red cedar and even big-leaf maple have been affected — especially when those species are in exposed or south-facing areas. 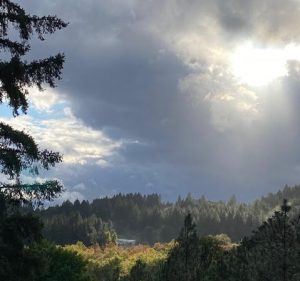