On Saturday, June 4, an intrepid band of 34 guests braved torrents of rain and howling gales to re-tour the 2020 Linn County Tree Farm of the Year, known as Bogwood, co-managed by Shirley Jolliff and Leland (Lee) Peterman. If you’re questioning your calendar about now, let me put your mind at ease — it is indeed 2022, but due to the Pandemic disrupting everything over the past two years (and poor attendance at the first attempt of a TFOY tour) a redux was deemed to be in order.

At approximately 10 a.m. the attendees gathered in the front yard and after brief introductions and a history of the property, Jim Merzenich, past president, presented Shirley and Lee with a plaque from the American Tree Farm System (ATFS) for being chosen as Linn County Tree Farmers of the Year 2020. The guests were then shown the native garden/seed bed lovingly cared for by Shirley, filled with Western geranium, meadow and rose checker-mallow, spring gold, and yarrow and fenced in by a 2-foot wattle fence built with left-overs from the spring broomstick harvest.

The formal, if one can call it that, the tour began with a brief walk through the West gate and down the West loop, briefly pausing to describe, then crossing “Beaver Creek” showcasing the grand debut of the “Ponderosa pine-wood bridge”; built entirely from trees thinned and milled on Bogwood.

Walking through recently mown trails through the boggy meadow, guests were told of the years-long battle with the dreaded English hawthorn and thinning of the forest edge to allow native Oregon white oak to reclaim lost territory. After allowing the long line of dampened tourists to catch up and gather around, a description was offered of the Beaver dam analogs (BDA’s) across the seasonal stream to catch and slow the storm run-off, thereby replenishing the aquifers under the meadow. After making a quick loop through the bog, attendees were once again on (reasonably) Terra firma of an original logging road. A stop at an under-construction “Bio-den” aka, somewhat-planned-wildlife-brush-pile, brought out a discussion of habitat planning and reclamation. Several questions were fielded including keeping “snags,” or standing dead trees, for woodpeckers, bats, and other wildlife who require specialized housing.

Following a short walk under a dripping forest canopy, the guests were shown Bogwood’s newest additions in the form of Northern California black walnut (Juglans hindsii) planted with an eye and hope, of mitigating the effects of climate change and the impending arrival of the Emerald ash-borer, (EAB). The seedlings, obtained from a Northern California nursery, are the same species of walnuts thought to be brought north by First Nations people and found throughout Southern Oregon as forage stocks before the invasion of the Euro-American settlers of the early 19th century. As they grow in identical riparian areas as the Oregon ash, they are logical replacements when the EAB makes its completely unwanted appearance.

Continuing along the West loop, the guests began the gentle, yet slippery, climb up the trail past just budding Lupine and Columbine blossoms to the junction with the South loop; another of the original logging roads crossing the property uphill of the boggy lowlands. Rain-heavy, drooping Hazel and Oceanspray along with the generally soggy trails, made for a damp game of viewing the forest and maintaining steady footing. A brief stop and chat regarding a legacy wildlife structure/stump, with the original “springboard” notch still visible, and the group slogged on to the junction with the East loop.

At this point, the rain had increased, so short stops were made to allow the long line of dampened to catch up and points of interest kept to a minimum; the “Big tree” on the East property line, estimated age at least 160 years and 170’+ tall as well as stray cottonwoods at the lowest boggy point along the East loop.

Upon return through the East gate and allowing the stragglers to clear the said gate, the group was delighted to note the rain had finally eased up and demonstrations of the electric sawmill and various battery-powered tools used in maintaining Bogwood were shown. Some folks at that point took advantage of the lull and made their getaways. Those remaining were offered coffee and homemade baked goodies from Shirley’s kitchen; (who, by the way, is the elected “Official baker” of the South Santiam Watershed Council.) Discussions of Bogwood’s solar farm (a 7kw Pv system) and other topics were undertaken inside out of the resuming drizzle.

All-in-all good attendance, despite the damp, (nearly .75 inches accumulation according to my Oregon Season Tracker/CoCoRaHS rain gauge) for a second attempt at a Linn County OSWA 2020 Tree Farm of the Year tour.

My gratitude to Jody E. and Brad W-R at OSU Extension for putting out the word in the Compass/Needle and to our fellow Master-Woodland Manager trainees.

Shirley noted that MWM training has shown them new resources, such as websites that show the property’s soil types and moisture content.

And during a field trip to the 2020 Beach Creek Fire area, she said, it was interesting to see “how intensely burned areas have a few plants trying to grow, lesser burned areas have a lot of plants from tree seedlings to all kinds of different forms and areas that were totally untouched by fire. From a hilltop location, we could see a mosaic of burned and unburned patches.”

Special thanks to Shirley and Anna Merzenich for baking goodies and making coffee and also to the attendees who braved the out-of-character early June rains to give Bogwood another chance to be viewed and appreciated as I do.

Perhaps, our next tour will be drier and warmer. 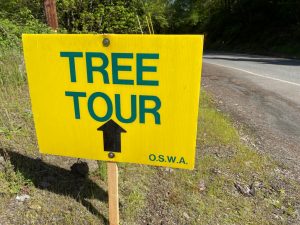