Oak Basin Tree Farm is in the valley foothills south of Brownsville with elevations varying from 600 to 2,200 feet. Approximately one third of the property is dominated by oak and native prairie, one third grows ponderosa pine, and the remainder supports Douglas-fir, grand fir, and big-leaf maple. This article describes reforestation efforts in the Douglas-fir zone.

During planting the seedlings are tubed with a protective mesh to reduce browsing damage. The tubes also help us locate the trees when spraying. We spot spray around each seedling in early spring to kill grasses and weeds which compete for limited moisture. Follow-up spraying is used to control blackberries, thistles, maple sprouts, and other noxious weeds as needed. This intensive regimen maintains the native shrub component benefitting native song birds. Prior to 2018 units reforested with these methods had a 90 percent or greater seedling survival rate. We did little inter-planting, assuming that if a seedling died the planting spot was unsuitable.

In the fall of 2018, we cut two units totaling eight acres which contained a mix of mature Douglas-fir trees interspersed with maple. The site faces northwest and has better soils than nearby sites which have successfully regenerated to fir.

In January of 2019, we planted a mix of Douglas-fir and incense cedar in one unit. We plant 1-0 plugs because they have a large root mass relative to the above ground foliage. Seedlings were tubed and sprayed with Glyphosate. This treatment effectively killed competing grasses and weeds.

The spring of 2019 was dry with an unusual stretch of 90+ degree weather in April. This was followed by a normal summer so we expected good seedling survival. Instead, 30 percent of the Douglas-fir seedlings died, while nearly all of the incense cedar survived. We presume that the hot spell in April damaged the roots ultimately killing the Douglas-fir seedlings.

In January of 2020, we repeated this process on both units. Many spots initially planted to fir were replanted with incense cedar. May and June were wet resulting in an explosion of oxeye daisy and foxglove growing within sprayed circles. After a scorching summer and dry east winds, more Douglas-fir seedlings died while the incense cedar survived. We surmise that the emergent annual weeds used the available soil moisture contributing to this mortality.

In January of 2021, we inter-planted favoring incense cedar in areas with previous high seedling mortality. To control annuals we added Oust, a pre-emergent control agent, to our spray regimen. This treatment was effective at controlling grasses and annual weeds but was insufficient in the throes of a mega-drought. Our rainfall totals were 0.68, 2.70, and 1.66 inches, in April, May, and June respectively. These totals are less than half of what is normal. April, a critical month for getting seedling roots established, had less than an inch of rain. From June 14 to Sept. 1, we received no significant rain. Seedling mortality is now apparent in both the fir and the recently planted incense cedar. A warm and dry September awaits as we plan more inter-planting in 2022. Drought and excessive summer heat have taken a toll on both our spirits and seedlings.

After three seasons of planting failures, noxious perennials are making a comeback. While our attention was diverted as we controlled Italian thistles in our grazed pastures, Canada thistle flourished in our planted units. Non-native blackberries are now on the rebound and are being attacked with Garlon. The steep ground necessitates doing this work methodically with a Solo sprayer. This is training for a Wallowa’s back packing trip that I will do in September.

Observations:
1) Drought has replaced deer browsing as our greatest threat to plantation success.
2) The boundaries defining suitable timberland are changing as climate changes.
3) The first year is critical. If competing vegetation is controlled, seedlings that survive the first year almost always survive the second.
4) Sites that have supported fir may no longer be suitable. Consider planting more drought tolerant species such as incense cedar or ponderosa pine. The resulting mixed-species stands are necessary when you have high site variability within a small area.
5) Traditionally stands are planted using a ten-foot spacing (436 trees/acre). A twelve-foot spacing (~ 300 tpa) is sufficient on our sites making pre-commercial thinning easier.
6) Established stands less than 20 years old are faring well in this drought with little mortality. They must now be thinned to maintain good health.
7) When spraying around seedlings use a surfactant to make the herbicide stick, a dye to tell where you have sprayed, and a pipe to shield the tree. The circle should be five feet in diameter or larger.
8) If desired conifers cannot be established do not abandon the site. Non-native thistles, weeds, and shrubs should still be controlled to favor native species.
9) Older trees also compete with each other for limited moisture. The best protection against drought is to maintain open stands across your entire farm with thinning.
10) These problems cannot be blamed on sloppy tree planting since I planted each seedling. Here’s hoping that you can learn from my mistakes. 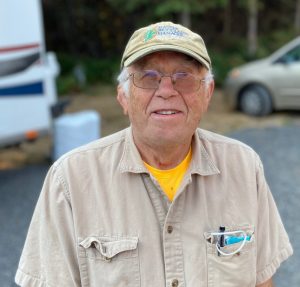