In a region awash with disasters, humility is a must

Maybe because our lives are short, compared with the landscape in Western Oregon, it seems to be our lot that we often don’t appreciate the enormous power of this natural world we occupy. It’s hard to remember that we are small and fragile in this place.

In a way, I was fortunate growing up in Northern California in the 1960s, having a front-row seat to some of nature’s larger moments. I always knew it was dangerous out there.

On Oct. 12, 1962, the historic Columbus Day wind storm tore through Northern California and Western Oregon. So many tree-covered areas I knew were flattened that day. Those of you who experienced that storm here in the Willamette Valley certainly have your own stories to tell of the day.

On March 27, 1964, a magnitude 9.2 earthquake shook Alaska, taking 131 lives in all, 12 of those were in my hometown of Crescent City, as a result of the tsunami from that earthquake. I remember driving into town that Saturday morning and seeing many of the buildings damaged, and the concrete sea-wall tetrahedrons moved by that rush of water.

At the end of that year, in late December 1964, it started to rain hard and did not really let up until a week into January. This was then described as a “100-year storm” for the Pacific coast and was considered the worst flood in recorded history for much of the Pacific Northwest. I remember that the ocean surf was covered in floating logs for weeks.

The wind, the trees, the ocean, the rivers, and the very ground you stand on, can suddenly lash out and destroy you. When these events happen, we are emotionally shaken. In May 1980, watching Mt. St. Helens erupt, I added volcanoes to that list. While protecting structures during the Biscuit Fire in 2002, I added fire. Last month, visiting Shawn and Aaron White, I added ice.

On Feb. 12, 2021, freezing rain began to cover everything in part of our area with a heavy coat of ice. Interestingly, the south edge of this event was just north of Lebanon. Our tree farm between Lebanon and Sweet Home had no ice damage at all. The Whites, however, near Scio, had major damage to their trees. An ancient Oregon White Oak stood alone in the hilltop pasture. This majestic tree was one of those perfect giants, with enormous branches swooping to the ground in a full circle. According to the Oregon Encyclopedia, these large trees can be over 400 years old. Aaron and Shawn’s oak is now a shattered mass of brokenness. Douglas-firs of all sizes have also been broken and brought down by ice. The White family has spent most of the past 16 months cleaning up, harvesting what can be salvaged, milling some into lumber, and creating many 1-cord racks of firewood. In dealing with this natural disaster, their talent, patience, courage, and hard work speak volumes about what it means to be a tree farmer.

I’m not going to get into a discussion here about whether the climate is changing, or whether humans are causing it to change. For what it’s worth, my opinion is yes and yes. You can read widely and draw your own conclusions. I am asking that you consider the climate we have now and your relationship to it. I would suggest that we approach our management of the forest with humility and an understanding that we are just doing the best we can with the tools and knowledge we have. Realize that things can go horribly wrong, that the best plans can fail. I would also suggest that we encourage each other in difficult times and offer to help out when disaster strikes. After living through a few of these disasters, I’m beginning to realize that we will get through this latest one too. As hard as it is to face, it’s not the end of the world. 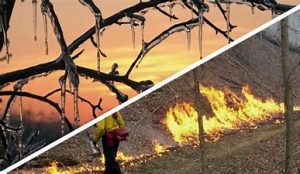