Last year, we needed to water newly planted seedlings while this year, we had to keep them from floating away. The 5.54 April inches are not the most recorded on the Farm for April — which was 8.83 inches in April 2003 —but it was substantially more than our 20-year April average of 4.29 inches.
The Oregonian reported on May 1 that Portland airport recorded its wettest April in 2022 after recording its driest April in 2021. Records at the airport began in 1939. Although we had a wet April, it’s still dry for this temperate rainforest. 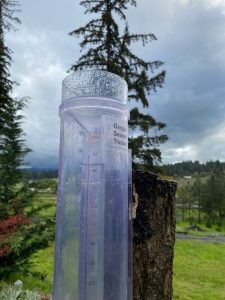 Rain gauges this year were brimming in April compared to 2021.