Clem and Trumbull Ogilby know they have a piece of paradise. They bought land in 1988 with rich Jory soil — Oregon’s official state soil.

Their 30 acres at the tip of Rice Road near Holley is property that was part of an 1850 Donation Land Claim.

Overall, there are 18 acres of timber. Part of  it is plantation Douglas-fir put into the ground in 1994. There is also a hillside loaded with tall fir that is 60 to 80 years old.

A perennial spring with native cut throat trout feeds a pond on the parcel.

Tuesday afternoon on May 10 was warm and sunny after a wet stretch of weather. Clem Ogilby shared the richness of the site with about 35 guests as the Linn County Small Woodlands Association resumed its tree farm tours following covid shutdowns.

“We didn’t know a lot about growing trees,” the transplant from Maine told the group. The family’s goal, he said, was to use the property — which includes a 12-acre swath of rich pasture currently in hay production — “to sustain ourselves as much as possible.” Wine grapes are a future possibility in the pasture area, he said.

Ogilby met LCSWA members Bud Baumgartner and Aaron White in the early 1990s. The two have been guiding lights for Ogilby in the past three decades, he said. Both men were part of the tour.

The cattle pasture, said Ogilby, was “a mess” from overgrazing. “It took a lot of hard work and years to recover from that,” he said.

Baumgartner had advised against planting fir because of deer and mice predation. A 10 by 10-foot stand was planted, however  and thrived in the soil. Trees are now being thinned based on finding dominant trees and working around them, he explained. Selective thinning is based on observed defects. “We’re trying to grow happy trees,” said Ogilby. He is the owner of Best Oregon Tours and appeared comfortable talking about his efforts.

Poles are being harvested, he said, then peeled and used for fence posts.

The property’s tall timber is cathedral-like with numerous small altars of neatly stacked firewood along the trail.

Ogilby said he has learned part of the value of that stand is “aesthetics.”

For that he credited White and Baumgartner — both past Linn County tree farmers of the year. “They instilled that particular ethic in me,” said Ogilby. “I’ve got grandchildren. I’d like to leave something for them.”

Some trees in the tall stand have been harvested. In 2006 a neighboring property was clear cut to the fence line, he said.

The following year a windstorm brought a blowdown to the newly exposed trees. Some 15 loads of logs came out of the jumbled mess, according to Ogilby.

Working with Ogilby on the property for the past two years, he described Jerame Gibbons as “his right-hand man.”

Gibbons efforts of hand-cutting brush in the former blow-down area was on display for visitors.

Following the tour, walkers enjoyed snacks and an open fire along with quiet conversation.

At one point, Ogilby displayed some petrified wood he says is abundant on the site. There were forests here before this forest, he noted.

The family’s guiding principle today, Ogilby said, is pretty simple. “We really wanted to leave this place better than we found it.”

Next up in a series of “howdy neighbor” tree farm tours hosted by the LCSWA will be a June 4 visit to Bogwood, an 80-acre tract near Lacomb. 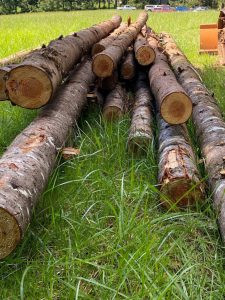 Poles that have been thinned from Douglas-firs planted in 1994 will be stripped of bark before use.