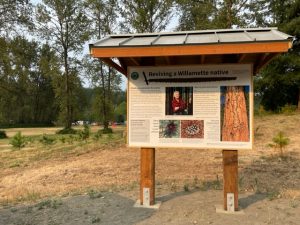 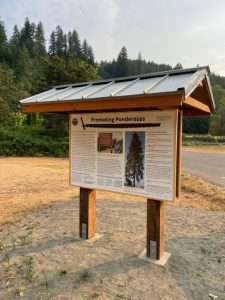 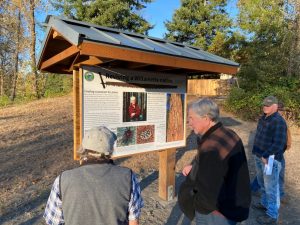 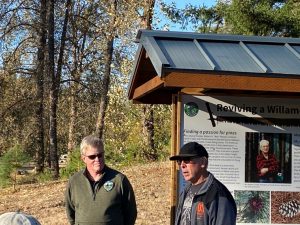 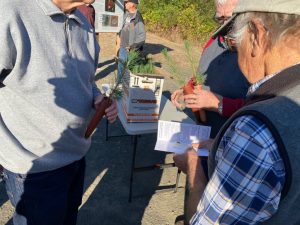 At the close of the Oct. 15 dedication, donated Ponderosa pine plugs were available for those who wanted them. Photo by Larry Mauter.

Double-sided interpretive panels explain the history and rebound of the Willamette Valley Ponderosa pine — a separate race of pines from those growing in Eastern Oregon or south.

Along with the covered signs, a grove of 60 young pines was planted in March 2021.

Also featured in the panels is the story of Robert H. Mealey, a forester who was part of a pioneering Sweet Home family.

He established the Linn County chapter of the Oregon Small Woodlands Association. Before he died he also established an investment fund to promote forestry education on small timberlands.

Mealey’s son Steve and many individuals who worked with Mealey in his efforts to revitalize the native pines attended the morning gathering. Parks Director Brian Carroll represented Linn County at the event.

Carroll coordinated the county effort in securing a suitable site at the park for the Linn County Small Woodlands Association (LCSWA) project. He was thanked for the efforts of county park staff.

About 40 people attended. Those who spoke recalled the efforts of Mealey — then an elderly man — climbing trees to gather seeds from the few native pines still in the area in the 1980s.

Among the speakers were Rick Fletcher, a former OSU Extension Service adviser who worked extensively with Mealey.

Content for the signs, the locally grown and milled pine support timbers and assembling the framed cover was furnished by LCSWA volunteers.

The LCSWA also served morning pastries and coffee. A box of 50 Ponderosa pine plugs was available for people to take home and plant a tree or two.

The pine grove and signs are located adjacent to a parking lot along Quartzville Road just past the main entrance to Sunnyside Park.